Roy Ash once said, “An entrepreneur tends to bite off more than he can chew hoping he’ll quickly learn how to chew it.”  This is the case for many entrepreneurs who get the privilege to appear on Shark Tank.  Sometimes the Sharks roll with it, other times entrepreneurs don’t stand a chance.  Lindsey Laurain from Colorado certainly fit this mold quite well during her 2015 appearance on Shark Tank.

Lindsey and her husband Brad were fed-up during meal times with their messy kids.  As a busy mom of 3 young children, she decided to come up with a solution for less mess and faster clean up after meals. 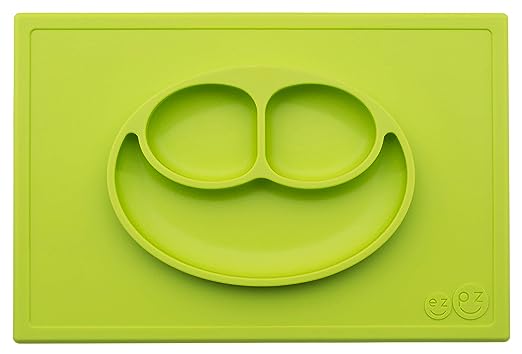 Lindsey dreamed up The ezpz Happy Mat, an all-in-one silicone mat and bowl that suctions directly to flat surfaces, preventing children from knocking plates and other dishes onto the floor or throwing it during tantrums.  This idea was unique, as nothing like this had previously existed when she desperately looked for this kind of product.

The ezpz Happy Mat comes in various cheerful colors and has a cute, friendly face that helps separate the food for the child.  It’s also durable and safely made from 100% food-grade silicone, free from BPA, BPS, PVC, latex, phthalate, and other harmful chemicals.  Silicone is often praised for its inability to grow mold, bacteria, or fungus.  The mats are also stackable, making meal prep for many mouths manageable.  This feature also makes it very easy to stack them for storage.

Lindsey had her children’s health and future in mind when making this mat, as the happy face makes up three compartments with plenty of room for appropriate servings of fruits or veggies, proteins, and carbs.  The compartments are deep enough to accommodate cereal with milk or pasta.  The point of the Happy Mat is to help engage the children in the natural behavior of self-feeding.  This helps them to develop their fine motor skills.

What’s even better is that the mat is both dishwasher and microwave-safe.  It can even be used in the oven (up to 350 degrees Fahrenheit).  Genius, right?  What parent wouldn’t want this for their young children with all of these amazing benefits?  Countless times I have watched my niece, and nephew (ages 5 and 8) manage to get cake, spaghetti, and other soft foods pretty much everywhere else but their mouths.

Lindsey funded the development and production of the ezpz Happy Mat through Kickstarter, raising over $70,000.  After appearing at a kid’s expo in Las Vegas, she made multiple contacts with industries that were willing to potentially sell her product.  The only problem was that she needed more money for the logistical operations and production numbers.  To make this a reality, she applied to be on Shark Tank.

Unfortunately, things didn’t go so well from the very beginning of the shower.  She had lost their support immediately when she offered only 5% stakes in exchange for a significant 1 million dollar investment.  Obviously, she did not do her research in who she was dealing with and the typical offers the Sharks would bite at.

She was interrupted immediately by comments from the Sharks but smiled politely and carried on gracefully with her pitch.  She proceeded to show a short video of her children chaotically making a mess while eating so that others could relate, then demonstrated to the Sharks how efficiently the Happy Mat could work.  After demonstrating this, she showed a second video of a more organized and peaceful meal while her children used their Happy Mats.

Lindsey told the Sharks that the Happy Mat would be selling for $25 and 50% profit margin belonged to her for each unit.  Kevin O’Leary immediately wanted to know more info about the sales, forewarning her that sales would need to be significantly high to gain support.

Lindsey, again, did not do so well for herself when she admitted she was initially was going to come to the tank with a valuation five times higher than what she had just stated.  She quickly continued to lose the trust of the Sharks, who had been burned before, but just as quickly she tried to shift into damage control mode by telling them that 2014 had brought gross sales worth over $1.2 million.

The Sharks were not taking the bait, even when she stated that she had been in contact with around 400 international distributors who were interested in her product.

Lindsey was asked if the product had been patented, to which she replied that it was still pending.  The Sharks displayed their disappointment before they started to circle in for the final attack.  When asked about her profits, she admitted she was only at 14%, not 50%.  They scoffed 5-year projected $20 million.

While Robert had laughed at Lindsey’s answers to his questions, Kevin, who had been teeming with rage with clenched hands, at one point stated, “I’m trying to be kind before I absolutely eviscerate you.”

Lindsey tried to remain confident but the Sharks seemed to see right through it.  Robert and Lori had dropped out, but Kevin, who had been the most agitated of all, gave a conditional offer, taking the 5% for $1 million, but if she didn’t get to $10 million as she promised, he would get 20% instead.  Barbara had made a similar offer.

Since her unpleasant experience with the show, the popularity of the product sky-rocketed.  The mat is now a highly reviewed award-winning product and available on Amazon and various other websites, currently rated 4.5/5 stars.

It goes to show that if you truly believe in something, you have everything you need to make it happen.  Perhaps the Colorado mom will invent more products that will stick, just like her mats, to more companies, changing the lives of frustrated parents everywhere!